Reliable Contracting Is Building a Solar Park In Annapolis 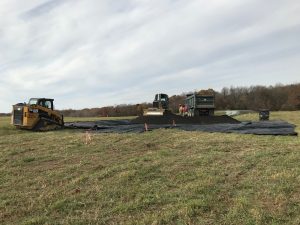 The solar energy park is set to be built on 80 acres of a closed landfill near Interstate 97, and Route 450.

Reliable Contracting has another major project in the works! We were recently hired as the site contractor for a multimillion-dollar solar energy park in Annapolis, Maryland. This project has taken several years to get started. In 2009, Mayor Ellen Moyer proposed a 500-acre solar, biomass and methane energy park, but the idea came to a halt because there was trouble hiring a developer. However, now a 16.8-megawatt solar energy facility is well on its way!

Here are some general facts about the project:

-The solar energy park is set to be built on 80 acres of a closed landfill near Interstate 97, and Route 450.

-The Environmental Protection Acts confirms that once the project is completed, it will be the largest non-federal solar project on a closed landfill in the United States.

Mark Kemper, Reliable’s site superintendent stated “We are constructing an access road which will create a loop around the Annapolis Landfill, on top of the existing ground for a solar park that will produce enough electricity to power 4,000 homes when completed. The challenges are meeting the requirement of using equipment that has less than 7 lbs per sq. in. ground pressure, as not to destroy the existing liner cap over the landfill. The site also required 3 miles of 12-inch filter log around the perimeter for sediment control, staked every four ft., which is a little out of the ordinary.”

Benefits of a Solar Park

According to Annapolis Mayor, Michael Pantelides, the solar panels will create more jobs and support local businesses. He also added that the solar park should also present learning opportunities for local businesses and that it should generate over five million dollars for the city over the next twenty years. According to the Capital Gazette, the city of Annapolis will receive an average of $260,000 annually.