The Early History of Asphalt 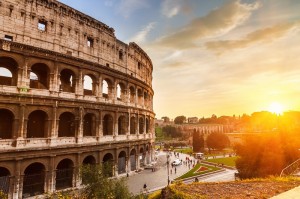 The early beginning of asphalt usage began in Ancient Greece and Rome.

Have you ever wondered who came up with the idea to pave roads with asphalt? How long has asphalt been around, exactly?

In America, asphalt has played a prominent role in paving our roads since the late 1800s. However, humans have been using asphalt almost since the beginning of civilization. Today, we use advanced techniques to develop the strongest asphalt that is created in labs and then made into roads. During early human civilization, societies used natural asphalt deposits that would occur in asphalt lakes and rock asphalt (a mixture of sand, limestone, and asphalt). The history of asphalt begins in Ancient Greece.

The Early History of Asphalt in Ancient Greece

The word “asphalt” comes from the Greek word άσφαλτος (asphaltos). The concept of using asphalt as road pavement didn’t develop until several hundred years later in Europe. In the meantime, Ancient Greeks used natural asphalt as a sealant for baths, reservoirs, and aqueducts. Later, the Ancient Romans would adopt asphalt for the same purposes and call it asphalton.

Laying the Foundation for Asphalt Roads in Europe

It was Telford’s contemporary, John McAdam, who developed a type of asphalt that is similar to what we use today. After being appointed a trustee of the Scottish turnpike, McAdam taught himself engineering so that he could better understand road construction and how to improve it. He realized that the natural soil underneath the road had to be kept as dry as possible in order to avoid sinking and wearing away. McAdams developed a method of drainage that we still use today, with roads that were covered in broken stone “which shall unite by its own angles so as to form a hard surface.” Later, to minimize dust during construction, road pavers started to use tar to bond the broken stones together, creating what was called “tarmacadam” pavement.

In Little House on the Prairie, Laura Ingalls Wilder describes her first encounter with an asphalt road in 1894:

“In the very midst of the city, the ground was covered by some dark stuff that silenced all the wheels and muffled the sound of hoofs. It was like tar, but Papa was sure it was not tar, and it was something like rubber, but it could not be rubber because rubber cost too much. We saw ladies all in silks and carrying ruffled parasols, walking with their escorts across the street. Their heels dented the street, and while we watched, these dents slowly filled up and smoothed themselves out. It was as if that stuff were alive. It was like magic.”

The first asphalt road in America was laid by a Belgian chemist named Edmund J. DeSmedt. DeSmedt’s sand mix asphalt road was laid in front of the City Hall in Newark, New Jersey. Later, DeSmedt paved Pennsylvania Avenue in Washington, DC with natural sheet asphalt from Trinidad Lake Asphalt. This project proved that asphalt created in America was just as good as asphalt imported from Europe, paving the way for a booming American asphalt industry.

Tune in for the next blog to see how the asphalt industry developed in America from the 1800s to today!

Categories: Asphalt Paving | Tags: Asphalt, asphalt paving, and History of Asphalt
This entry was posted on Friday, November 11th, 2016 at 3:25 pm. Both comments and pings are currently closed.