In Memory of Tom Baldwin

Reliable Contracting is very sad to announce the passing of our former president, Tom Baldwin. He is survived by his wife and his five children, including current president Jay Baldwin and current secretary/treasurer, Patricia Baldwin. Tom passed away peacefully on the evening of Thursday, July 30, surrounded by his family. 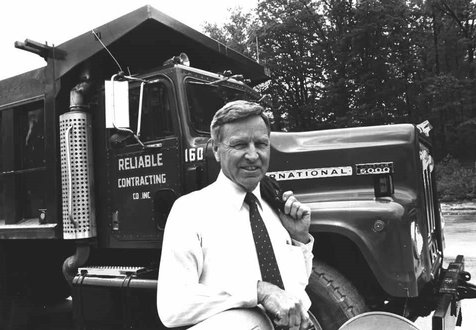 It was through Tom that Reliable Contracting was built into the strong and dynamic industry leader it is today.

In 1928, Tom’s father and uncle, Frank and Bill Baldwin, purchased a used dump truck for $200 and entered the hauling business. Over the next 10 years, their business grew until they were awarded their first State contract, backfilling the bulkheads at St. George Island. Reliable Contracting actually incorporated in 1942 after Frank and Bill acquired a few more dump trucks, a bulldozer, and a few more employees. When the two brothers decided to return to farming after World War II, Tom purchased his father’s share of the company in 1950. As a recent graduate from Cornell University, Tom expanded and grew the business, seeking out road construction and excavating jobs in addition to hauling. It was through Tom that Reliable Contracting was built into the strong and dynamic industry leader it is today.

Tom took over as president of Reliable in 1986 and served until 2001, when he stepped down to allow our current president, his son Jay Baldwin, to take over the business. Since 2002, Tom served as Chairman of the Board, where he continued to be actively involved in the company. In addition to his prestigious titles within Reliable, Tom also served as President and founder of ABC Chesapeake, President of MD Highway Association, Chairman of the Board of Providence Center, Chairman of the Board of the Anne Arundel County Hospital, founder and first President of the Anne Arundel Medical Center Foundation, Director for Catholic Charities, Christendom College, and a leader in the establishment of The School of the Incarnation, Gambrills, Maryland over his lifetime.

Tom lived a great life serving the people of Anne Arundel County. He was well-loved and respected by his employees and colleagues. His leadership and charismatic personality will be missed by all and he and his family remain in our thoughts and prayers.

This entry was posted on Tuesday, August 4th, 2015 at 6:23 pm and is filed under blog, Uncategorized . You can follow any responses to this entry through the RSS 2.0 feed. Both comments and pings are currently closed.